Templeton House’s escape from demolition and oblivion to become an incredible rarity: a country estate within the M25

The 1930's were dark days for Georgian London, when both aristocratic town houses and suburban estates were being swallowed up by new development at an astonishing rate. Following the sale, Templeton House and its grounds must have seemed fixed on a familiar trajectory that led - quickly or slowly, but inevitably - towards demolition and oblivion.

The grounds of the house were, indeed, truncated for the development of Roehampton Gate in 1932. Yet, against all the odds, not only has the property otherwise survived, but, over the past decade, it has been brilliantly restored, both as a family home and as the beating heart of a London estate. 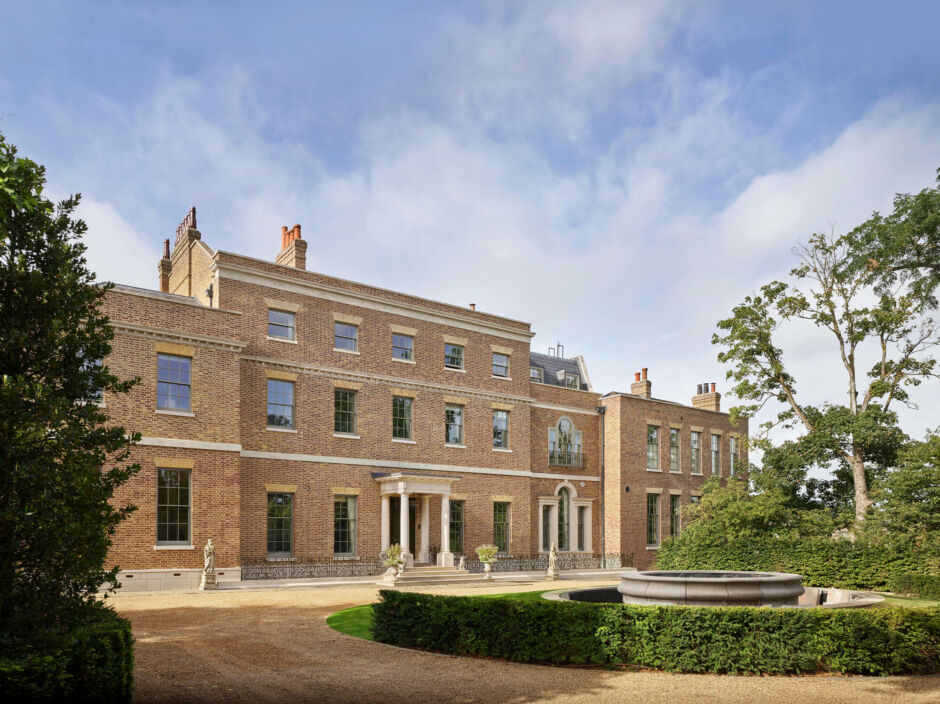 Templeton House stands on land that once formed part of a deer park created around Roehampton Great House in the late 1620's by Sir Richard Weston, Lord Treasurer to Charles I and later 1st Earl of Portland. At the time, Richmond was a favoured royal resort and the King was enclosing neighbouring Richmond Park with an immense brick wall about eight miles long. In the 1770's, Sir Richard’s former estate was purchased by a lawyer, Thomas Parker, who began to sell off plots of land for development and, soon afterwards, Roehampton Great House was itself demolished by Sir Joshua Vanneck.

He commissioned the architect James Wyatt to design a replacement villa, Grove House, in 1788, but then sold the property in 1791, after inheriting Heveningham Hall, Suffolk. It was against the background of these changes, on land split off from the Roehampton estate - probably in the 1780's - that Templeton House must have been built. The house is first recorded on a map of 1787. Unfortunately, however, it has not proved possible to identify either the name of the contractor or its designer. This original house constitutes the central block of the present building; a spacious Georgian brick box five bays deep and, at first, entered from a door facing east towards the road runs past it, Priory Lane. A number of fixtures from this house survive, including several fireplaces, some decorative plaster work and a fine stone staircase with an iron balustrade. 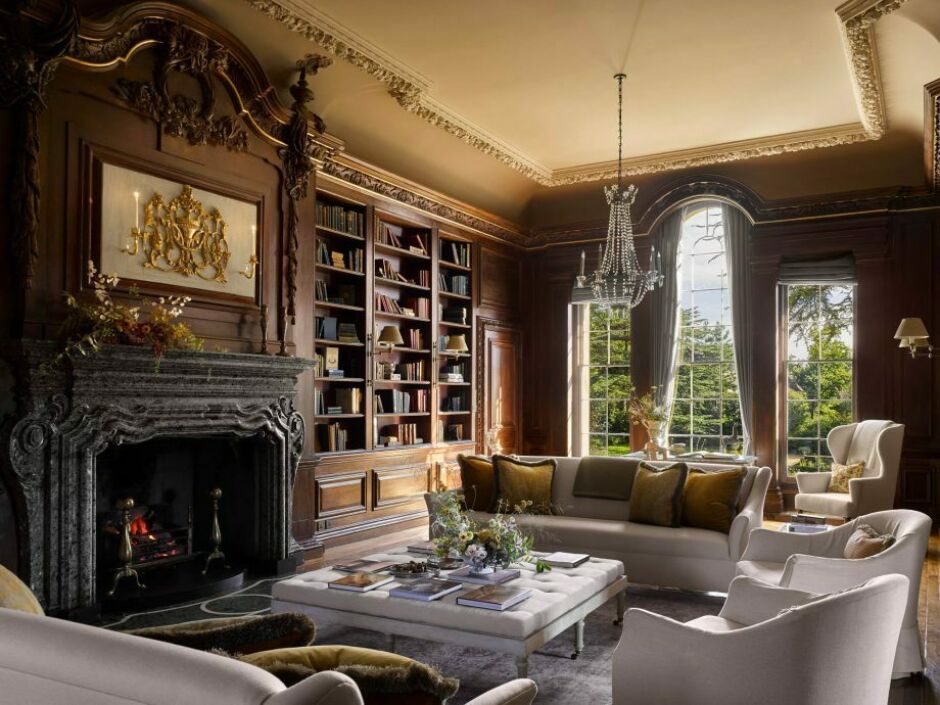 By tradition, the first occupant of this fashionable suburban villa was Elizabeth, Lady Templetown, her corrupted name (it was often misspelled) being bestowed on the property. The personal circumstances of this fascinating, creative and well-connected figure might plausibly suggest that she came here after being widowed in 1785. Lady Templetown was the daughter of Sir William Shuckburgh Boughton of Poston Court, Herefordshire. In 1769, she married Clotworthy Upton, who was in service to the Dowager Princess of Wales. Clotworthy was ennobled in 1776 as Baron Templetown of Templetown in Co Antrim and the couple had three children.

It may have been as a domestic pleasure that Lady Templetown developed a talent for cutting out images in paper - what we now term silhouettes. Paper cut-outs enjoyed considerable popularity in this period, but, in the early 1780's, her interest took a remarkable semi-professional turn. On June 21, 1783, she delivered some cut-outs to Josiah Wedgwood, the famous ceramicist. These, and a whole series of later designs, many of them on a domestic theme, were modeled in the Wedgwood factory Etruria by William Hackwood and reproduced in its ceramics. 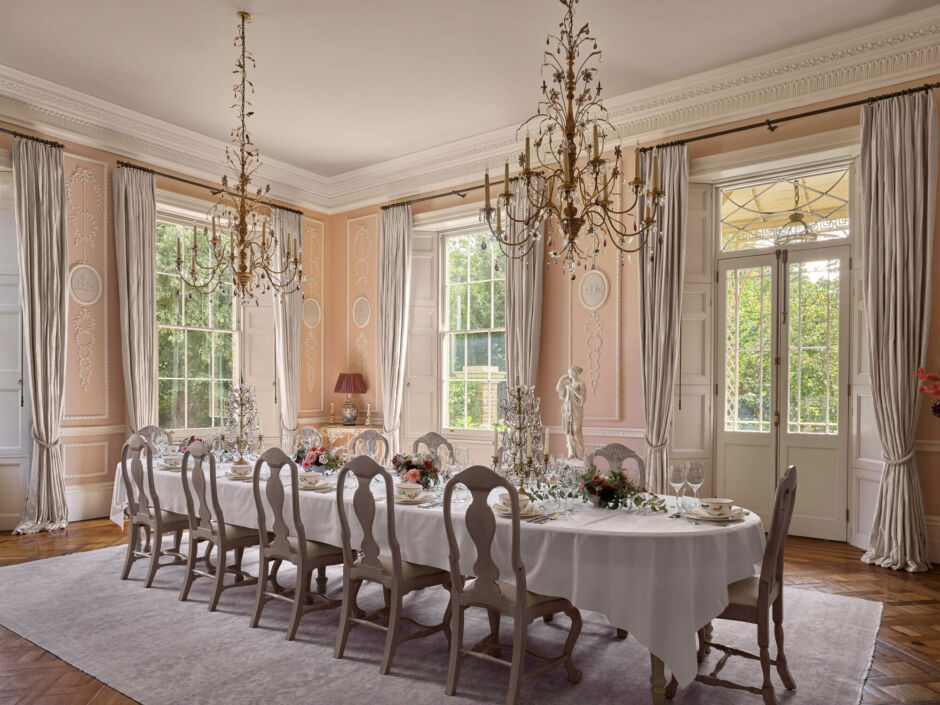 Wedgwood was fully aware of the value of such a distinguished artistic collaborator - in 1786, she was Lady of the Bedchamber to Princess Amelia - and was at pains to emphasise in his 1787 catalogue that ‘Lady Templetoun, whose exquisite taste is universally acknowledged, has honoured me with the liberty of copying her designs’.

This degree of distinction was unusual for Wedgwood, but, as usual, he judged the market correctly; the designs were both accomplished and popular. As one biographer, Samuel Smiles, observed in 1895: ‘Had Lady Templetown been a poorer woman she might have made a fortune by her wonderful gifts.’

As a matter of fact, paper cut-outs were not her only artistic enthusiasm. In 1783, the year she first worked with Wedgwood, her husband engaged the architect Robert Adam to redesign his Irish seat at Castle Upton, Co Antrim. When Lord Templetown died, in 1785, Lady Templetown, who presided over the estate during the minority of her eldest son, continued to develop the project. It’s a curiosity that the dining room at Castle Upton preserves a number of sculpted panels possibly commissioned or even executed by her. Finally, it’s suggestive of musical interests that, in 1798, the composer William Carnaby dedicated ‘Six Songs’ to her. 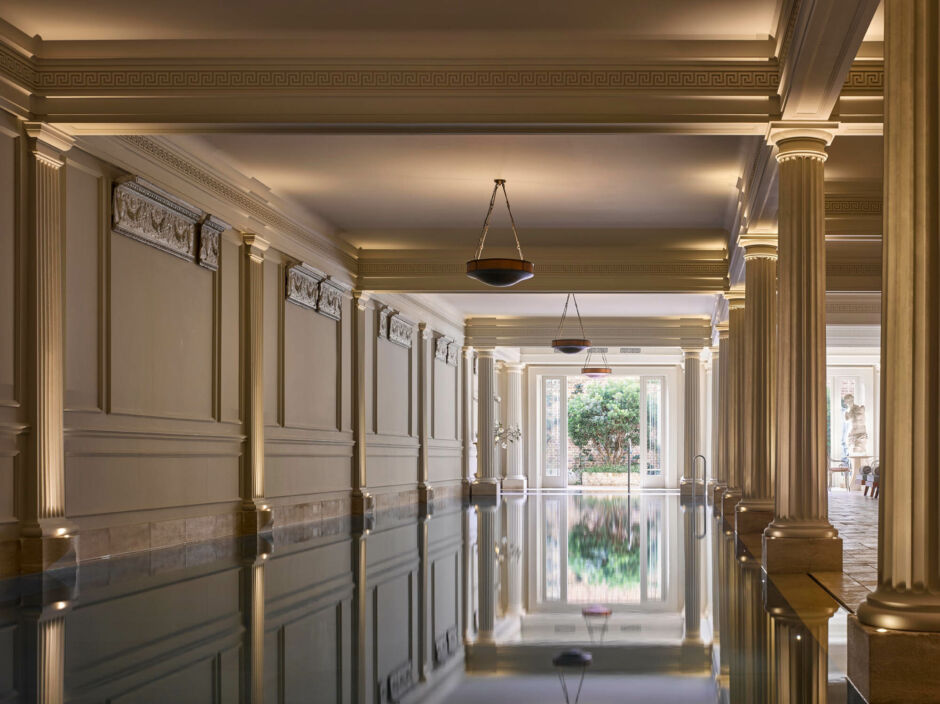 In later life, Lady Templetown spent a great deal of time in Rome and it’s not clear how long she or her heirs owned Templeton House. Its history only begins to be properly understood in 1834, when it was occupied by one Edward Burn.Three years later, it was sold and sometime thereafter the lease passed to the legal reformer and master of the Rolls Henry Bickersteth, Lord Langdale. He may have extended the house to the rear, lengthening the structure by a bay before his death in 1851. Further additions of service buildings are recorded to the back of the house on the large-scale Ordnance Survey map of 1869.

The next long-term owner of Templeton House, in 1876–93, was Henry Lancelot Holland, governor of the Bank of England. It’s likely that he changed the orientation of the house, adding a wing to the east with a bow facing south into the garden. This overbuilt the original front door, which was now transferred to its present position on the north side of the building. As a result of these changes, the house began to look unusually long in proportion to its depth. The 1780's building still formed the centrepiece to the house, taller than the ranges to either side, but essentially undifferentiated from them. 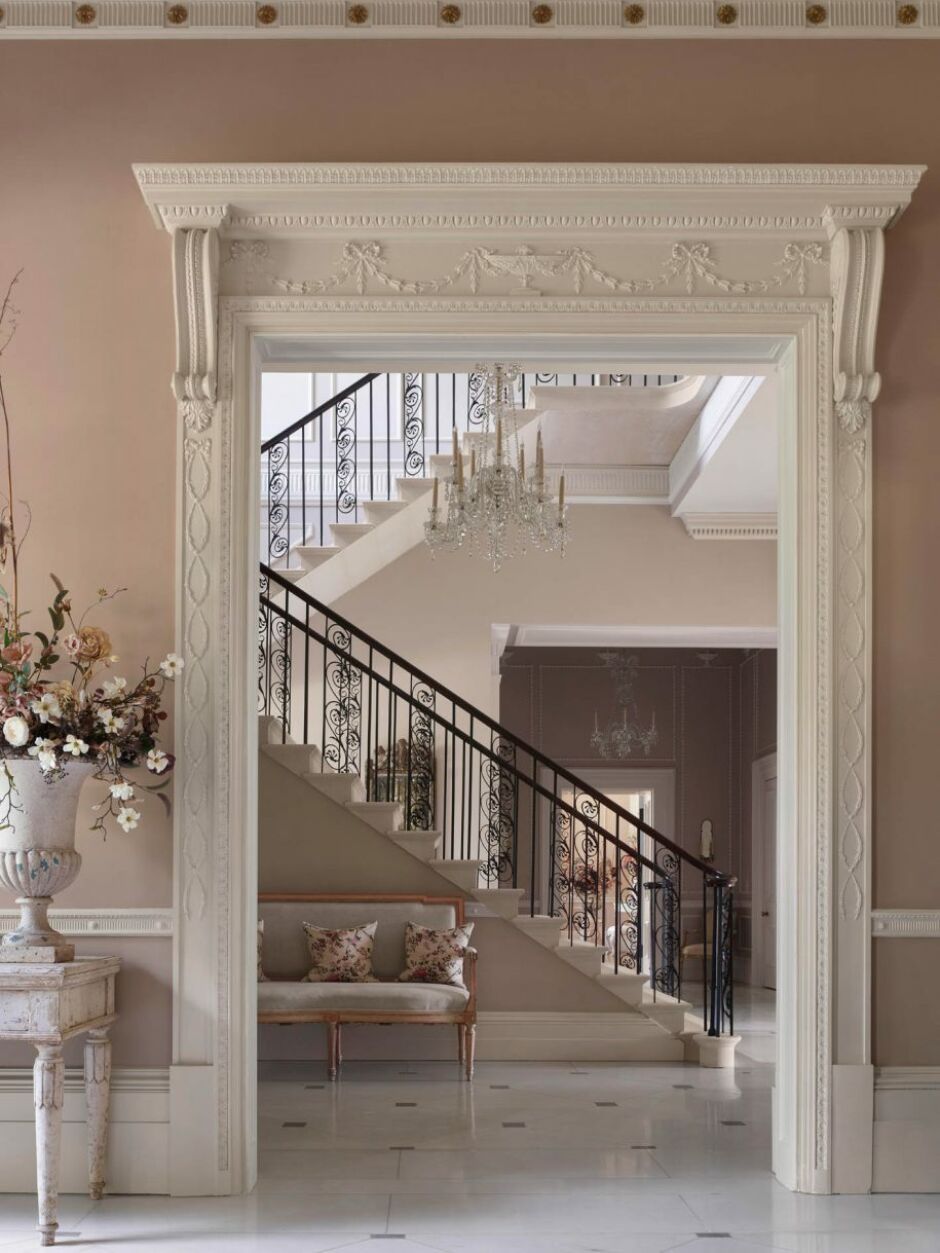 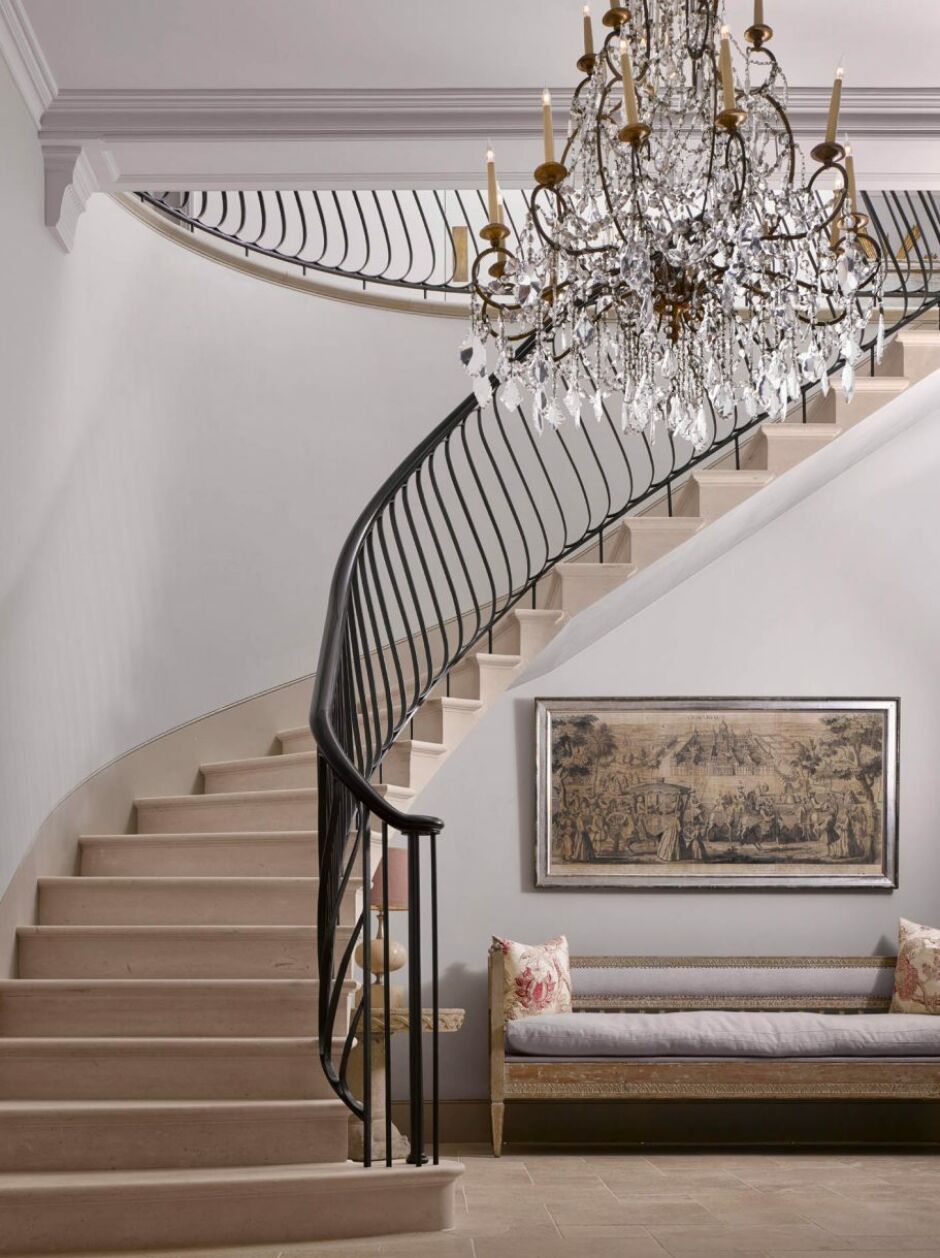 In about 1906, the house was bought by Ivor Guest, later Lord Wimborne, a lifelong patron of Edwin Lutyens in the never-ending process of remodeling of Ashby St Ledgers, Northampton from 1903. Guest was presumably responsible for remodeling the library in the ‘Wrenaissance’ style of the late 17th century. It was his younger son, Captain the Hon Freddie Guest DSO, a keen polo player, who subsequently used the house and accommodated his cousin Winston Churchill here for a period in 1919.

Following the younger Guest’s sale of the property in 1930, the interior of the house and all the ancillary buildings were divided up as accommodation for the Incorporated Froebel Educational Institute. These changes were not particularly kind to the historic fabric, but, crucially, they preserved both the house and its landscape intact.

In 2009, the house was placed on the market and was bought by David and Laura Rich-Jones, with the aim of converting it back into a family house. The couple run development company Richstone Properties together and already knew Templeton House from living nearby and walking their dogs past the gate. For them, the project has clearly been a labour of love.

For the first year after their purchase, the Rich-Joneses lived in the building, which they shared with a final generation of students, and planned the work ahead. One preliminary task was to understand what survived of the historic fabric, in which task they were helped by Chris Howe of Brookes Architects. Another was to try and understand what internal changes needed to be made to unite the discrete 18th- and 19th-century sections of the house into a single building suited to modern family life. What they quickly came to appreciate, in addition, was that they had taken on more than merely an architectural project; because the house was so long and thin, they needed to link the building to its landscape and revive that as well. Their vision for restoring and uniting the two has been informed respectively, and collectively, by Bob Sandford of Julian Harrap Architects and the landscape designer Todd Longstaffe-Gowan.

The changes to the house have taken the historic fabric as their starting point, but have not been constrained by it. Onthe first floor - ground level at the front door - all the institutional partitions and services have been swept away to restore the historic layout of rooms. At the same time, the surviving historic plasterwork in the drawing room and parlour has been painstakingly restored. To preserve the patina of the wooden floors, boards have been replaced where necessary with salvage material and Joa Studholme of Farrow & Ball advised on the paint colours. 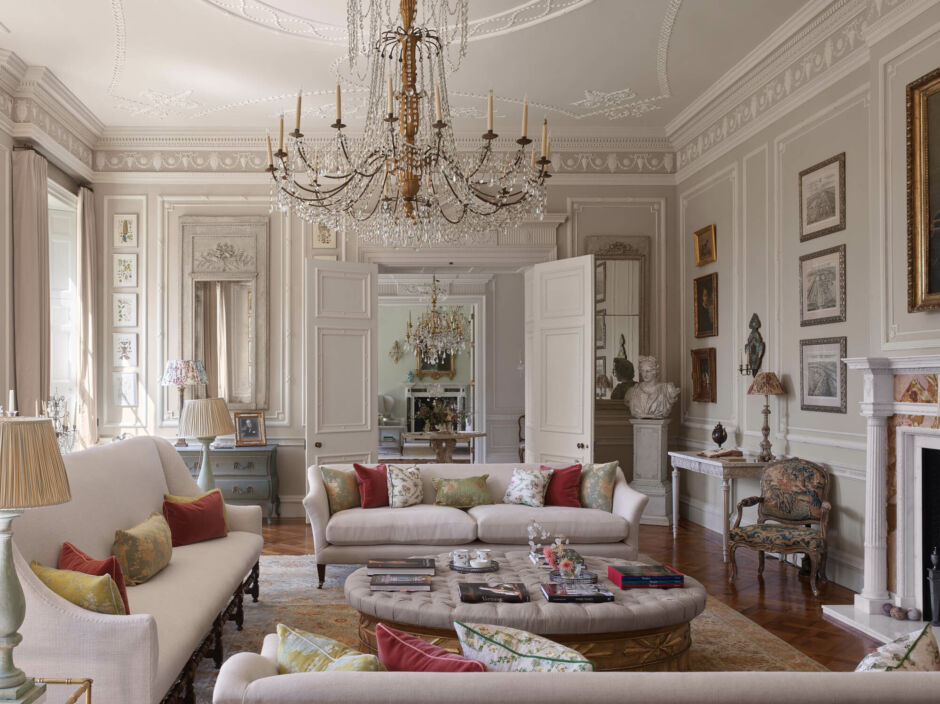 The task of restoring the plaster roundels in the parlour ceiling inspired the unusual decorative treatment of the dining room. This had been divided into four rooms and was bereft of any historic decoration. Working with the Wedgwood factory, a new series of wall roundels made after Lady Templetown’s original designs were specially manufactured for the room. The result is a stylish modern interior inspired by the history of the house and the personality who bestowed her name on it.

To suit the needs of modern family life, the kitchen has been moved from its 19th-century position on the ground floor to first-floor level. Here, it links much more effectively with the main interiors of the house and its windows have been enlarged to connect it visually to the garden. Mean-while, the basement has been significantly enlarged to accommodate a whole suite of 21st-century rooms, including a spa, a gym and a swimming pool. The exterior of the house has likewise been sensitively restored, with new surrounding parterres, repaired brickwork,fresh pointing and new sashes throughout. Making these windows to modern specifications, as well as preserving narrow glazing bars, proved a particular challenge.

A new stone porch dignifies the front of the house and, to give visual focus to the long garden front, an iron trellis has been installed. Little of the historic garden survived, but Mr Longstaffe-Gowan has worked with its remaining vestiges,notably a terrace, a pool (now enlarged) and some mature trees, including a magnificent cedar, to create a garden that brilliantly gives the illusion of being a long way from London. Work continues to the wider setting of the house and its nine subsidiary properties, including four cottages, a dower house, stables and an art studio. A dull garage has been reimagined in the manner of an estate building by Sir John Soane. Care has been taken to maintain the architectural hierarchy between these buildings and the main house. 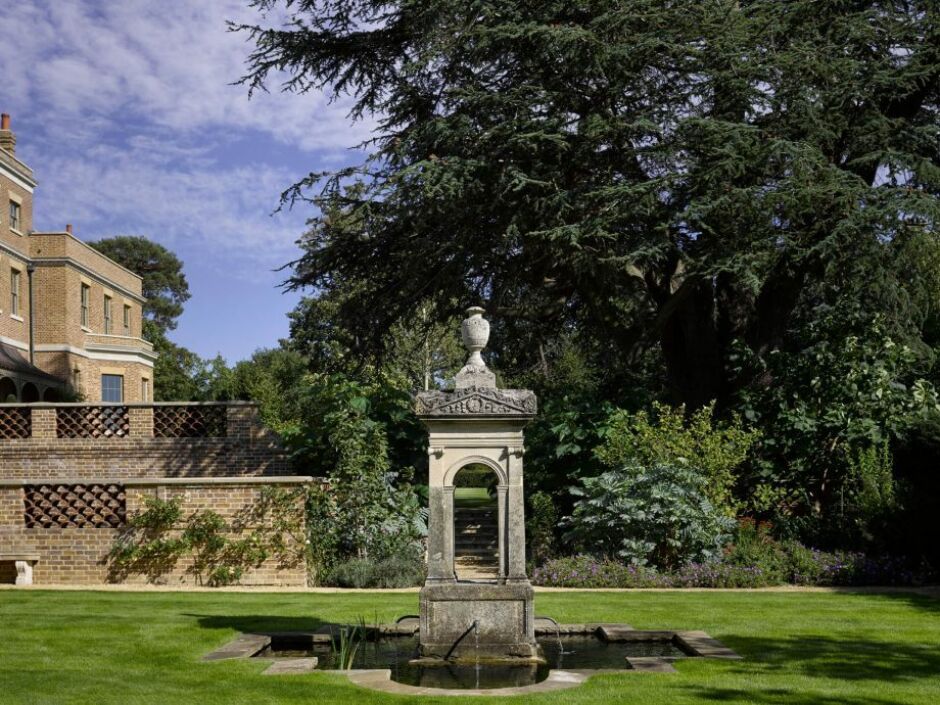 This is not a restoration that has simply been planned and executed, it is one that has evolved and continues to evolve. Driving that process is a meticulous and uncompromising attention to detail, so it’s no surprise that a particular pleasure for the Rich-Joneses has been dealing with so many specialists in the realisation of different aspects of the project. All the door locks, for example, were copied from one surviving original by a couple in Belgium, Peter and Regine van Cronenburg.

Taking this degree of care clearly delights the owners and has, as they freely admit, profoundly changed the way they approach new developments. The restoration of Templeton House shows not only that history and modernity can live together, but how they can inform one another as well.